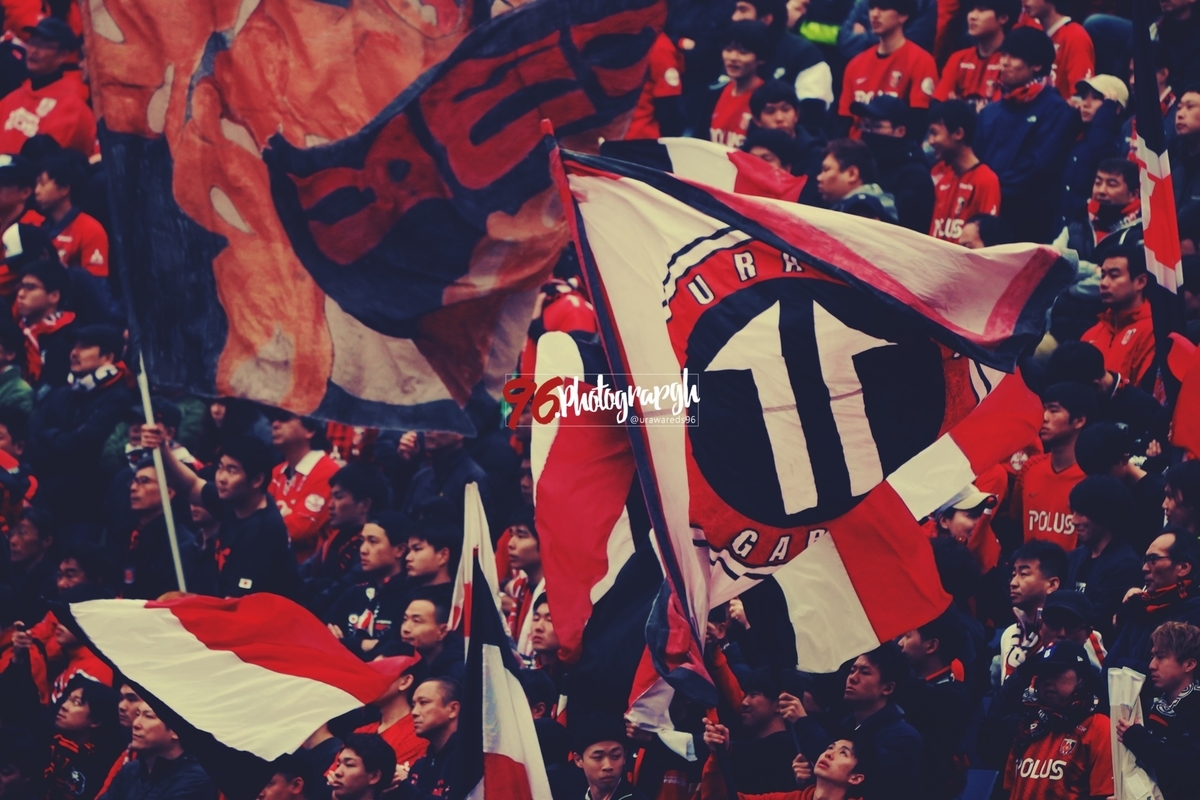 This is what I tried summarizing an outline of Urawa Red Diamonds' history and the coming 2020 season for global fans to understand more easily and detailed of our club.  I believe this will help global fans of Urawa Red Diamonds to understand the latest status of the club and to know how to enjoy the Reds of this season, though I am not so much confident with my command of English and this is my first article in English. If you want to know about who wrote this blog, please refer here for my self introduction.

An outline of recent history of the reds

First of all, I would like to briefly look back the history of the club. Out of its 25+ years of history, here's 4  periods of seasons I picked to understand the outline of recent winnings and loses, achievements and disappointments.

This 6, (more precisely, 5 and half) years can be called as "the age of Mischa". Michael "Mischa" Petrović, now a manager of Consadole Sapporo, agreed with Urawa Red Diamonds as a manager after his resign of Sanfrecce Hiroshima, which he lead 6 years of seasons. His football is very unique - though a few fans are somehow skeptical at any moment - with a systematic ball-possession style. Based on his never-running passion for "beautiful and spectacle football", his team developed an extreme offensive style with short passes & combinations in the attacking area. By using his variable 1-3-4-2-1 formation, his team dominated the league with winning the First Stage of 2015, the Levain (J-League) Cup in 2016, and 74 points in a season (for 34 matches/ the tie record of J-League). His variable system has been called widely as "Mischa system" in Japan and its derived version has become one of the most popular options in the league as many coaches in the league apply it to their teams.

His variable system uses 5-top attackers in forward and "Salida Lavolpiana" (dropping off one of CHs between CBs for building-up) at the same time in a ball-possession. Then 1-3-4-2-1 formation shifts to 1-4-1-5, putting heavy pressure on the opponent's back-line with wide 5-tops while his backs of 4 + GK are stably building up offense and supplying a ball to the forwards. 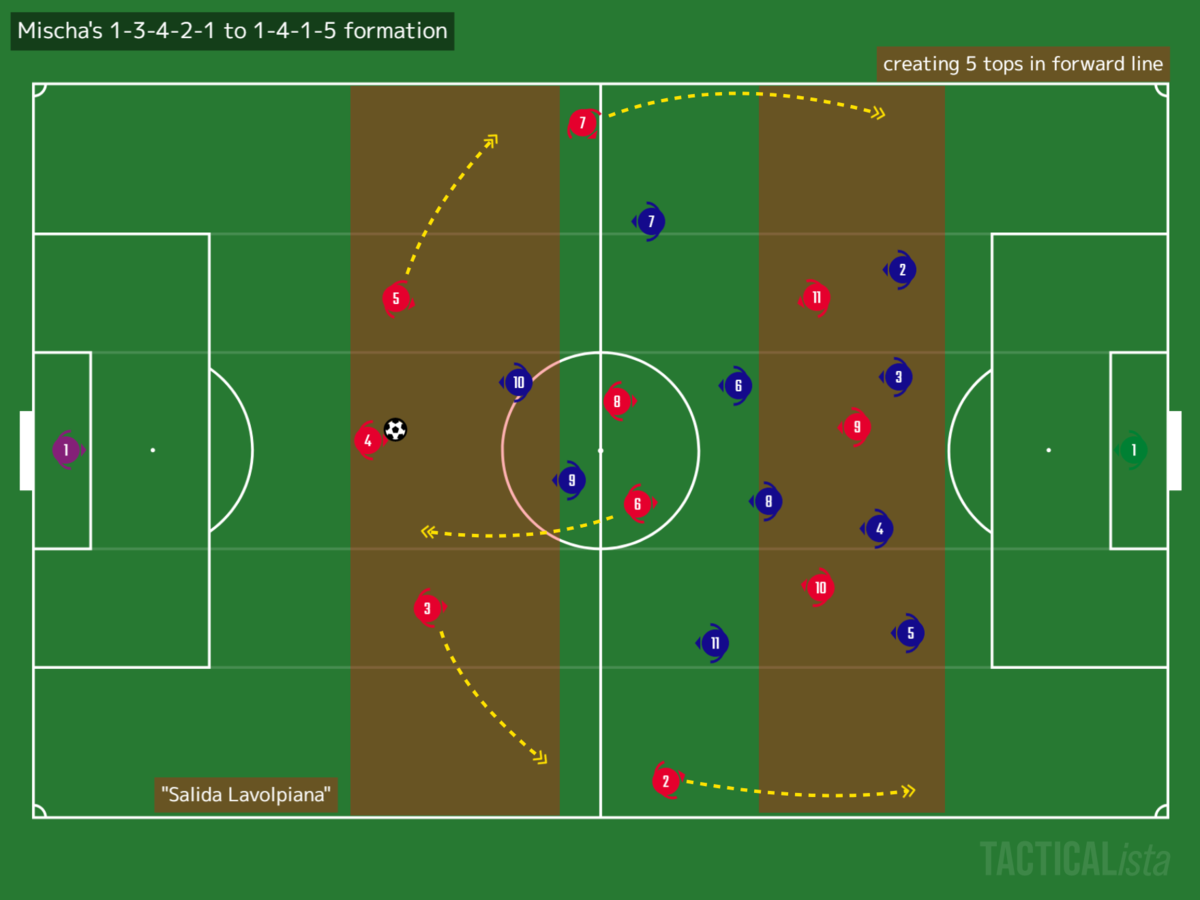 5-tops and 1 CH, and even 2 SBs are penetrating into the opponent's penalty area. Mischa likes a triangle - CF and 2 shadows, CF-Shadow-CH and/or Shadow-WB-SB - combination, often shown in the pitch, sometimes simultaneously. With many dummy runnings and flick passings that happened at the same moment, "Mischa system" scored 61 goals (1.79/game), which was more than any other clubs in the league of 2016. An attacking unit called KLM, consisted of KOROKI Shinzo (CF), LEE Chung-son, and MUTO yuki (Shadows) showed the best combination in the league, scoring 36 goals in the league. 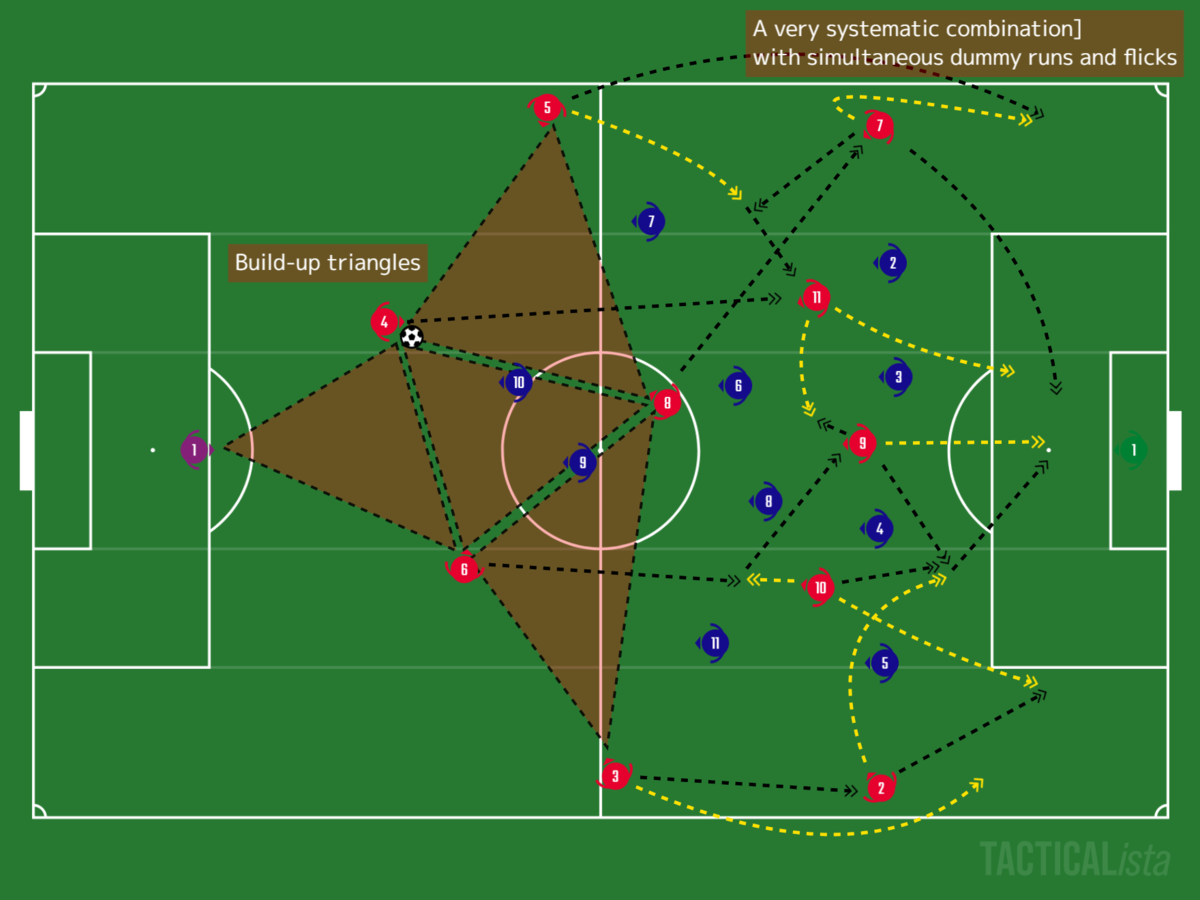 However, lack of the league title brought collapse to his team. In 2015 and 2016 season, J-League applied 2 staged framework for the league and the winning shale was awarded to the champion of the championship tournament that invites the champions of 1st and 2nd stage + the highest ranked team in the annual result. This rule was always against the Mischa’s team, with their lost of the Semi-final of the Championship in 2015 against Gamba Osaka, and the most disappointing one of the final in 2016, against Kashima Antlers. In 2015, although they were invited as the champion of the 1st stage and the annual runner-up with 72 points (and the annual 1st placed was Hiroshima with 74 points), the Reds was given 3rd place in the official result after the lost of the semi-final.

The next year, much worse, the Mischa’s team that earned 74 points in a season and got 1st place in the annual result, was beaten by Kashima that got 3rd with only 59 points in the season.

After the club lost the final of the championship in 2016, Mischa tended more attacking to win the league, bringing phenomenal scorer Rafael Silva from Alvilex Niigata. In 2017 season, he dismantled the KLM and directed his squad to be more aggressive, ideally to play almost all time of the game in the front court. After all, this didn't work with balance lost, and he was fired in July, with 9W2D8L.

A baton was taken over to Mr. HORI Takafumi, who had been a head coach of Mischa team for years. He was a former head coach of youth team (U-18) of Urawa Reds and won the H.I.H. Prince Takamado Trophy All Japan Club Youth Cup, leading the golden ages of Urawa Reds Youth including HARAGUCHI Genki, a Japan National. HORI had used his favorite 1-4-1-4-1 formation, to bring back balance to the team, with keeping combination which developed in the Mischa era. In fact, Mischa's combination was lost in his football and KLM was never shown in the Sairtama Stadium, though his team got more solid & aggressive deference in the middle and found a way to maximize Rafa Silva's scoring capability. With some miracle wins, the Reds proceeded to our second final of the AFC Champions League and won the Asia, beating Al Hilal with a goal by the attacker who would move to a Chinese club with roughly 9 million USD after the season.

2018 and 2019 seasons were cataclysmic for the club, beginning with the transfer of Rafa for Wuhan Zall Football Club just before the season started.  As a replacement Urawa acquired the Socerroo Andrew Nabout in the closing market. However it took time for him to fit the team and HORI was fired in early April, with 2D3L in the first 5 games of the season. Although it had been a significant issue for the club to find a path to go after Mischa's era, it had to be said that Urawa wasn't prepared well after Mischa's leave and signing with HORI was too easy. Amid growing criticism from those around the club for its lack of direction, the new president TACHIBANA Yoichi called back NAKAMURA Shuzo, who served as GM in 2001 to 2006, and the GM invited Oswaldo Oliveira as manager. Oliveira is known as the manager of Kahsima Antlers of its golden era when Kashima won three consecutive championships. His style of football was a solid 4-4-2 system - hard defense and quick attacking by 2 tops, which is totally different from Mischa's one. Oswald respects voluntary of players and request them to think how to play against opponents in front of them, which is unfamiliar with the squad being optimized with the highly tactical and methodical football of Mischa. Oliveira, who sealed his favorite 4 backs like a realistic coach who knew of victory and continued to 3 CBs, won the Emperor's Cup and qualified for the ACL in the 2019 season. However the manager who has started his career from an athletic coach failed managing a spring camp without any Training Matches which brought 5W2D6L in the beginning of the 2019 season and was fired in May.

Then NAKAMURA, the GM brought back OTSUKI Tsuyoshi as the manager of the red. Actually OTSUKI was a tentative manager just before Oliveira's arrival, before He had been one of the assistant coaches that the club had set into Brazilian "Team Oliveira".  As it was 4W2D with his hard leadership during his tentative assignment, the supporters generally welcomed his signing as the "permanent" manager as the first time of his career.

However the season was worse than last year. The former youth team manager after HORI, didn't present any of his style or tactics on the pitch. The man who started his career originally as a tactical analyst, seemed hesitating to push his style of play to the squads, playing 1-3-4-2-1 system as Mischa did. However he didn't build any of Mischa's combination nor systematic build-up, so that Urawa fell to the 14th in the season and was only a step away from relegation with 9W10D15L. What is difficult to udnerstand is, even in such a caotic situation, Urawa showed their deep determination for the stage of Asia, back to the final in the Saitama Stadium to see the asian Real Madrid, which had ironed the squa with Bafétimbi Fredius Gomis, Sebastian Giovinco, and André Martín Carrillo after the beaten by the red enemy in 2017. Although the Red Devils were experieced enough understanding how to play in the Asian games, Al-hilal had developed the unbeatable team with the world-classes who joined the club after the disappointed lose on the same ground. Through the home and away shceme final, Urawa had to learn how seriously their rival in West Asia had prepared to beat them and how high the Asian football level had got improved through the battles they had participated.

After chaotic complaints raised among the supporters for the 14th place and the club management that totally lost direction, the club swiped the GM position, fired NAKAMURA and set TSUCHIDA Hisashi as Sports Direcotr (SD) and NISHINO Tsutomu as Technical Director (TD).  What the president TACHIBANA mentioned in the conference was that the guys are former the Reds players - who understand the history of the club and what it means to play in the club, and the team has a plan for 3 years, which placed 3 concepts to develop the winning team based on key philosophy - "responsibility of the Reds" -  of the club. Many of fans didn't believe their plan and were afraid that the plan set OTSUKI as the manager for coming season, though the new management showed their confidence of his leadership and good command of analysis and tactics.