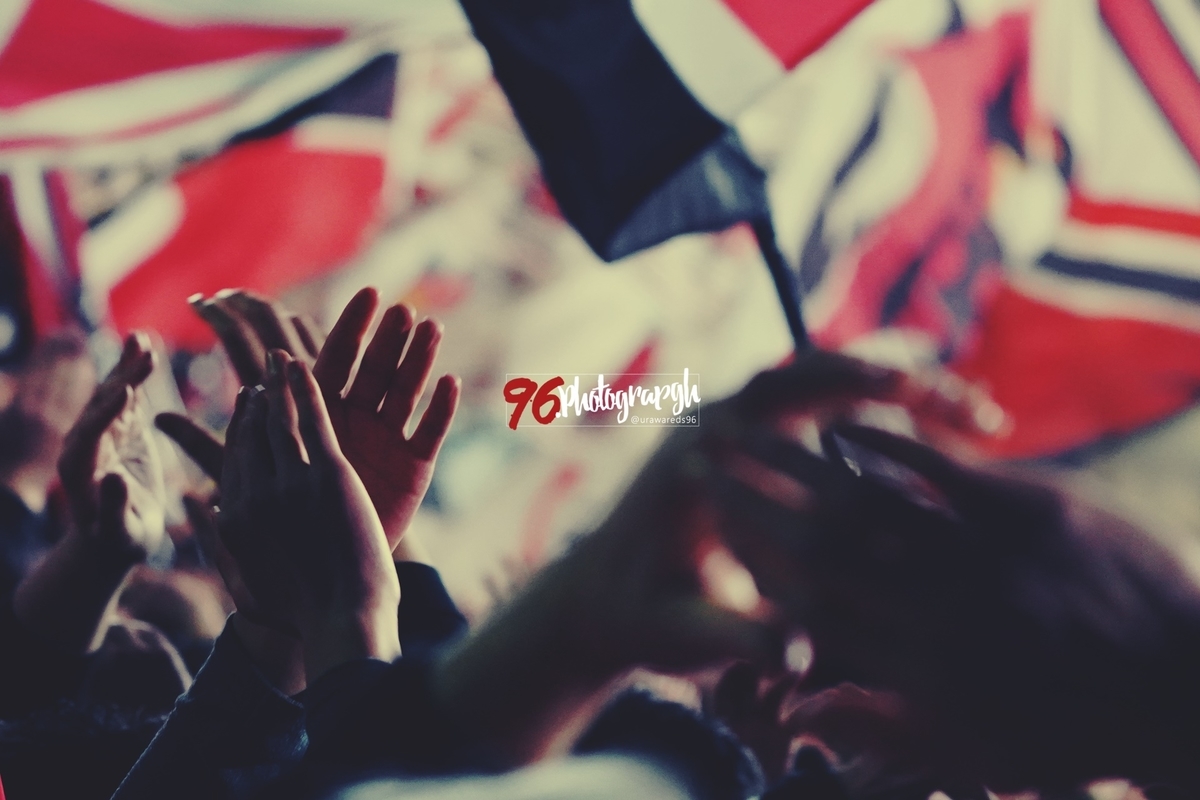 ... This article is following of the articles below:

Here I would briefly write how Urawa played over the 2 games held so far. Those 2 games have shown both aspects of the team, positive side and negative side. I hope you may understand more about the Reds, with the following my short reviews.

The opening game of the season was the game 1 of Levain Cup Group Stage v Sendai. Urawa Reds showed very good challenge for their new style of play.  Urawa's rushing into the Sendai’s goal once the Reds turned tha ball over giving the game right rhythm for the Reds. Although early 2 goals are not by Fast-breaks which OTSUKI’s side aimed to, but 3rd and 5th goals were created by the rushing counter while the boys in red showed good organized Fast-breaks which were occurred totally more or less 10 times in the game.

Good news for Urawa side was not only the result of the game but also newcomers seemed fitting to the team and ready to show the new style of play. LEONARD and SUGIMOTO both scored 2 goals each, and YURUKI, YAMANAKA and sometimes SHIBATO are appearing in the Fast-breaks. Considering that it was impossible for people to dream winning games without KOROKI’s presence in the last season, it has huge meaning that the Reds won the game with 5 goals without the definitive ace of the squad.

However, there were concerns that the club couldn’t hide behind. In the first half, after Urawa scored 3 goals in a line, Sendai suddenly took 2 goals back. Both goals were happened from Urawa’s left side and the goals elucidated Urawa’s issue for defensive tasks of SHs, especially where they should stand in their block. 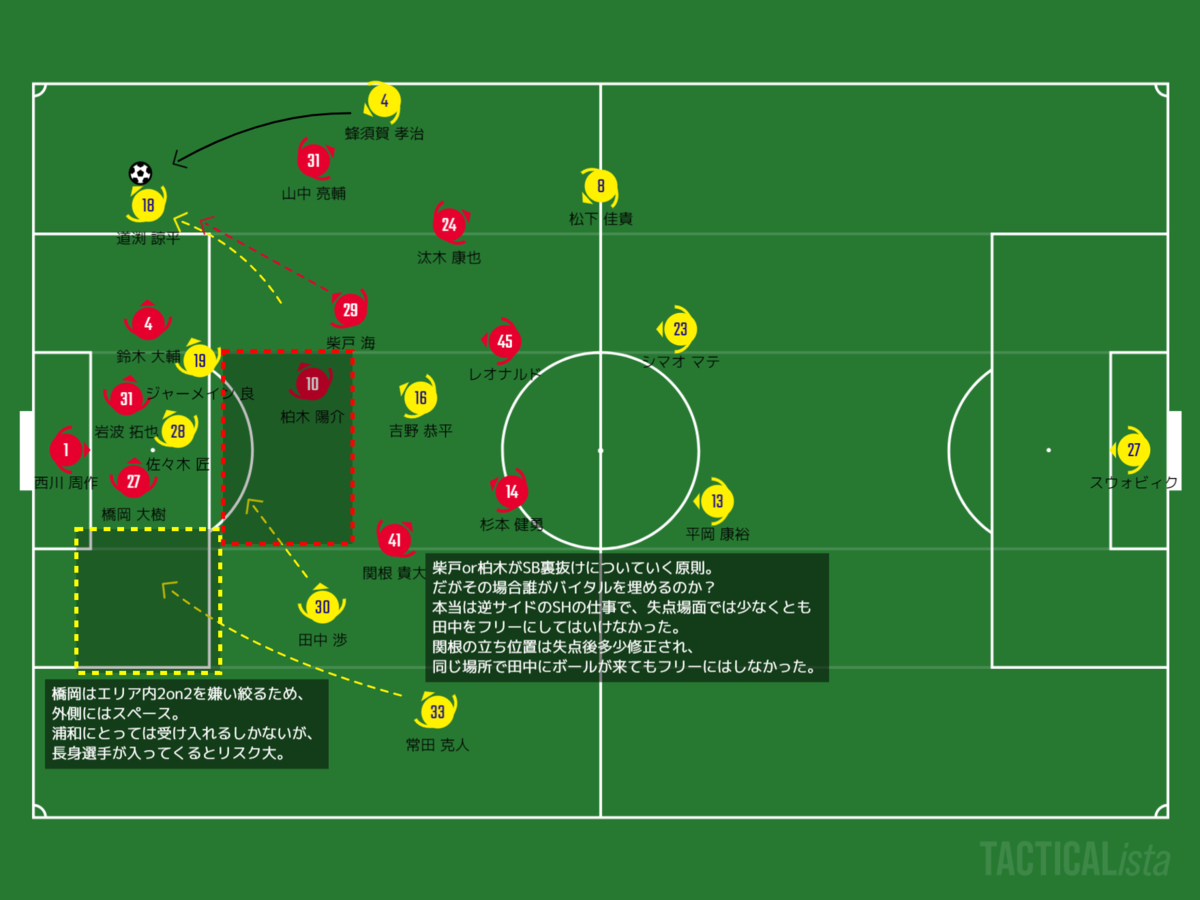 The left SH YURUKI said that the goals scored were not needed for the game and the first one should be pretended from happening by his defensive role. At the moment he appealed the referee for his judge and got a bit late for a quick restart by Sendai side. The second one followed the first only 30 seconds as it was made in the first play from kick-off just after the first one. DF IWANAMI Takuya confirmed there should be some points to be improved both in technical and mental aspects.

In every year, Urawa starts J1 League from a visiting game. This year it was v Shonan Bellmare, which has 4 players who played for Urawa before in the squad.

Shonan, which applied 1-3-4-2-1 as long as Urawa did, has slightly changed their formation as 1-3-3-2-2 (or 3-5-2). The green and blue club that has been known as “Shonan Style” that highlights aggressiveness to the ball instead of allowing themselves involved in an open game, are trying to build more possession style as they have struggled against J1 clubs if their players face one v one situation with J1 players with more quality than that of Bellmare.

As you may see whenever 4 back team plays against 3 back, Urawa has difficulties to catch marks, as the positions of both didn’t match each other. Mismatches were forcing the Reds in trouble to play, especially in the sides. Shonan tended to pot maximumly 4 players in the same side, including one of CF, IH, WB, and even a stopper of the same side allowed to making an over-lap. 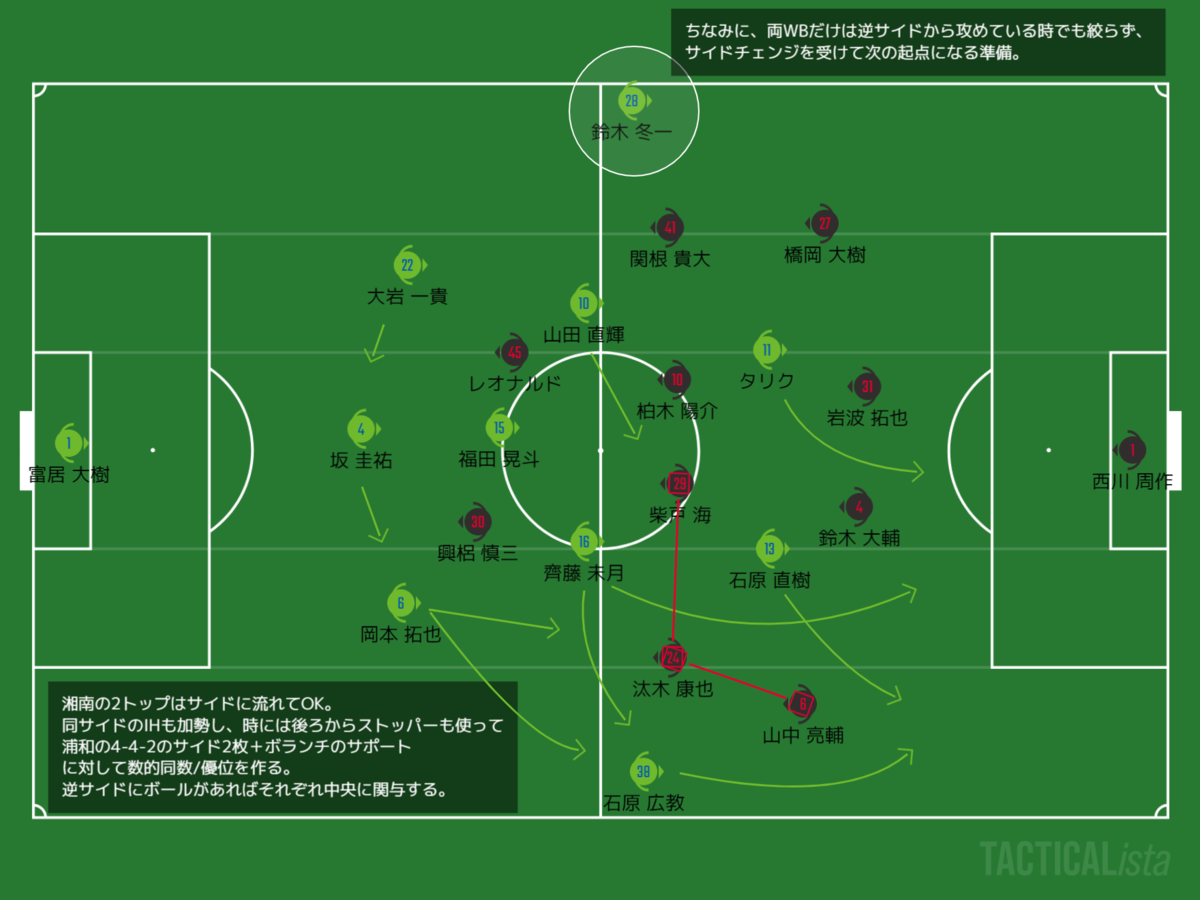 As Urawa assigned SH and SB for defense in the sides, they found difficulty to deal with their side attacks even though OTSUKI allowed his CHs (SHIBATO and KASHIWAGI) to help the sides. As a result, likewise as the game against Sendai, Urawa was scored by the cross from the left side of Shonan into ISHIHARA, who played for Urawa in 2015 to 2017.

After an early opener by Shonan side, Urawa however found the way for scoring back. YAMANAKA and YURUKI made a good combination to upset the green block to come pressure, and KOROKI got his 98th goal for the Reds. Again YAMANAKA shone with his left foot by a great cross delivered to LEONARD, who adjusted in very difficult body control while he was grabbed by his marker.

In the second half, Shonan got tie, again by the cross their good and young left side talent, SUZUKI Toichi. YAMADA Naoki, a former idle for the red supporters as he had grown up in Urawa City and junior youth team of the Reds, scored header in the goal area.

With this goal, Urawa were scored all 4 goals from crosses by sides, and it was obviously disclosed that there have to be points to be improved for Urawa’s defense structure to deal with side attacks by opponents.

However Urawa presented a spirit said by the “3 years plan” and its contests. In the last moment after the first VAR judge was given to SUZUKI Daisuke’s handling and Tarik of Shonan missed his PK given, the Diamonds ignited their new weapon. Just after MARTINOS got a second ball from a cross form Bellmare, suddenly he speeded up and left behind Shonan’s mark. SEKINE, given a pass by the dribbler, controlled a ball quickly and shot a winning goal in 85 min.

Urawa showed difficulty and less prepared for playing against 3 backs, but they won anyway the game in fact, by the new weapon of them - Fast-break. They took risks to keep SHs and 2 tops up when they are set for defense to go rushing into the opponent’s goal, so that they sometimes have to pay for that as it is shown as Urawa’s 4 scored goals by cross. However the risks are, in the game, to be paid for Urawa as SEKINE, who sometimes remained up when he had to stand more behind, scored the winning goal in the last moment of the game.

The outlook of the season - rivals and a tough schedule

For last, I summarize my outlook of 2020 J1 league. As we come through, Urawa is now in the reborn process. Thus in fact we are less expected to win the league by media in Japan so far, as we’re ranked 10th to 15th place in their ideas.

In centerpieces, there are expected teams such as Yokohama F-Marinos as the defending champion, Vissel Kobe with Andres INIESTA, FC Tokyo with Brazilian 3 tops, and very positional and tactical Cerezo Osaka lead by the Spanish coach Miguel Ángel Lotina. However Yokohama, Vissel, and FC Tokyo are to play for the AFC champions league, which those 3 clubs are not used to or experienced for the first time. As you might understand with the tie record of points (74) won by Urawa in 2016, J-League has been and will be  a very competitive but antagonized league. There should be chances for every team to come within 10th place, and it should be more difficult which team comes within top3 - where clubs are given right to join the stages of Asia.

Another to be discussed when we talk about the league is the schedule. This season has been understood with an irregular schedule applied to deal with the Summer Olympic Games in Tokyo, but here we come and have just found that the spread of coronavirus has a significant negative impact on the schedule. It has been already postponed more than 3 weeks until middle of March, and no outlook has been made yet. Now the teams are taking each reaction from staying the squads rest for more than a week to bring armature teams to their ground to have a training game.

Regarding Urawa, it is needed to use time of interruption of the schedule to develop especially the defensive structure. Now the team looks too fragile for crosses by the outsides, mainly after opponents changed the sides. With the improvement, the Red Devils can probably create more opportunities to rush into the critical spot of opponent. Their counter attacking might be more dangerous for competitors, if it could be created after good defense based on right positional sense, which brings more Reds’ players involved in the Fast-breaks.

So this is the end of the article.

Thank you very much for reading.

If you have any comments and/or requests, please do not hesitate to contact me through leaving comments below, or my Twitter account @urawareds96. And if there’re any points to be improved, your suggestions  will be very much appreciated.